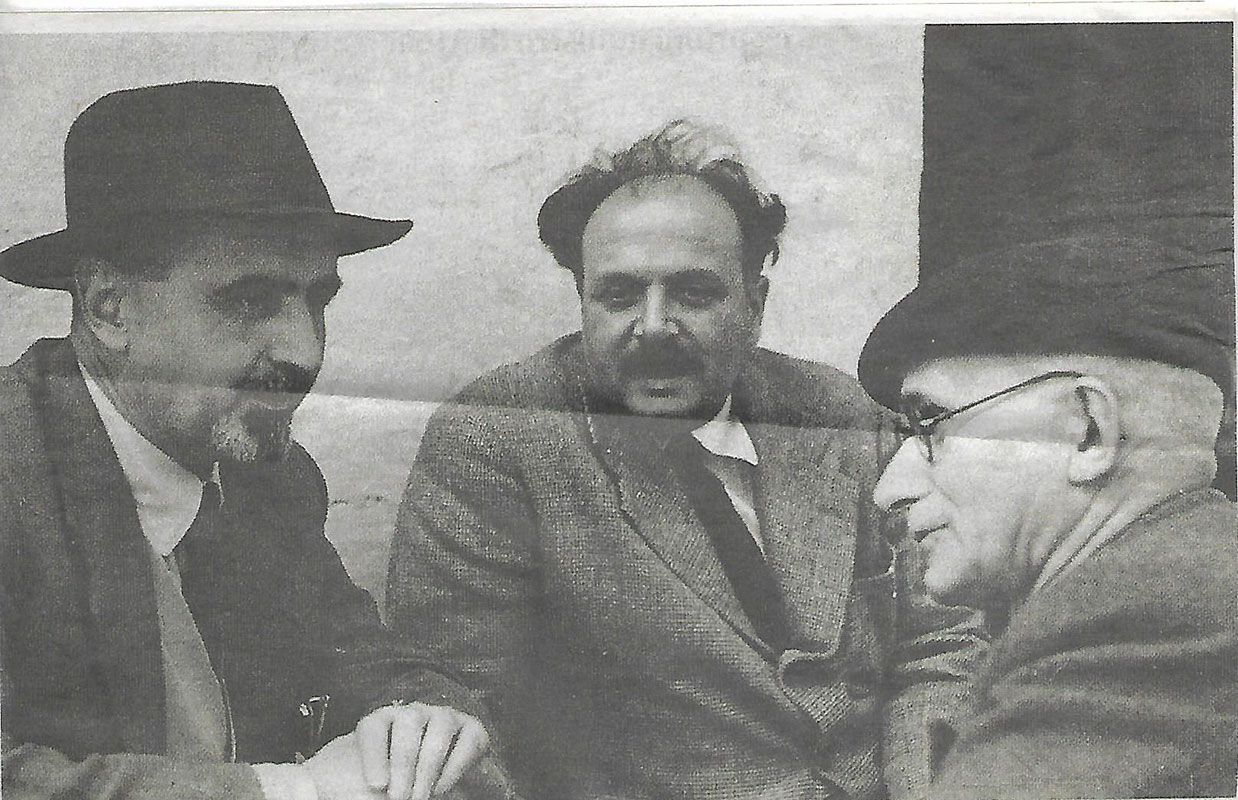 From the left: Ernesto Rossi, Altiero Spinelli and Luigi Einaudi

There is growing awareness that, these days, mankind is faced with difficult choices. The unfair distribution of resources and power in the world, the resulting large-scale-migration, environmental crises and pandemics – also caused by a deteriorating connection between men, nature and the land – , the digital revolution and the conflicts between world powers; all these are signals that we are going through an epochal change, rather than an epoch of change.

In 1941, in the midst of World War II, a few antifascists who were interned on the island of Ventotene realised that an epoch was closing. The European system could no longer provide for the progress of its peoples. For many centuries, there had been a repetite pattern, steady swing between fights for hegemony and attempts to strike a new balance among European powers. The actors on the scene were nation-states, the main instrument of their confrontation was war, and the scene was Europe – back then, the centre of the world.

The Ventotene Manifesto postulated the end of nation-states as a historic and political fact founded on the principle of absolute sovereignty. The first federalist movements were launched: the Movimento Federalista Europeo in 1943, then the Union des Fédéralistes Européens in 1946 and the World Federalist Movement in 1947. Those profound intuitions gave rise to the long process of European unification, based on the establishment of common supranational institutions. The relations between states, previously founded on violence and war, were transformed into relations based on law and peace. The start of the first supranational era in history put an end to the constant swing between balance and hegemony among European states.

For almost forty years, the world was governed by the balance of powers between the USA and the URSS, based on the nuclear deterrent. The process of European unification developed in the “west”; only here was the supranational process able to coexist with the values of freedom, democracy and social justice. In the west, the dominant power provided the two essential public goods: security and economic development, starting with monetary stability (the dollar standard).

1989 marked the end of that balance. What ensued was a short-lived attempt by the US to become the only global superpower (unipolarism), governing the world economic development. The start of European monetary unification in 1992 and the financial and economic crisis in 2007 showed that the US could not guarantee the development of the world alone, in spite of their technological and military power.

Other continental powers have emerged, or re-emerged: China, Russia, possibly India, and more. Seventy years of European integration have set up a state-like, though incomplete structure. The European Union has both federal traits – in those areas where its organs decide by majority – and confederal, where decisions are still made by unanimity (taxation and security, mostly).

As the world is congregating around global powers, this means that this is a state-based world system which, by its own nature, will necessarily swing between “balance and hegemony”, just as it used to do: in turns, actors will try to secure a strong competitive advantage over others (e.g. in digital or space technologies).

With its focus on the absolute sovereignty of states, this system will generally fall back on political models that were typical of the old European system and caused two world wars in the 20th Century. Back then, the development of the production process needed a continental market, the lack of which, coupled with a political framework lacking a “common governance”, led to war. Those confined in Ventotene became federalists because they learned that lesson and found the correct answer (“for a free and united Europe”).

Today, the globalization of markets, production, finance and consumption, as well as the growing pressure for international mobility for individuals, are nothing but the signs of deep movements towards a growing world unity. These signs can be seen in the major revolutions and crises that humankind is experiencing, bringing with them a new definition of the relationship between mankind, technology and nature. If it is not governed by global rules and institutions, the digital revolution can result in a new hierarchic order of states based on their “scientific know-how” – again, the power of a single state over others. If it is not managed by global democratic institutions, the environmental revolution risks endangering the balanced relationship between the human species and other forms of life on the Earth – again, triggering a possible fight among states to control resources and for the survival of the fittest.

What emerges is once more the historic dichotomy between the development of production, which is inherently global, and the underlying political and institutional structure, still based on nation-states (even though they are sometimes continent-sized). A few superpowers compete to be global rulers. The war with weapons is replaced by competition on international trade, digital technologies and, soon, space control. This shift is favoured by the present world order, so terribly similar to the order of European states in the 20th Century, which caused the annihilation of peoples on the old continent.

This is why it is so necessary now to go back to the alternative of Ventotene and to its fundamental truth (political division among men produces war) and to call to action, in order to build the first global supranational institutions: for environment, wealth, international trade, the monetary system and the digital world. Confirming the primacy of international politics over home politics, will support economic and political integration in Africa, the Middle-East and Latin America, because the unity of these areas will be a prerequisite for them to play an active role on the global stage. This, in turn, will strongly push ahead the process of political unification in Europe. Only with its own foreign policy, security policy and fiscal capacity will a united Europe be able to share the world stage on an equal footing with other continental powers, so as to lay the founding stones of a common world home.

From this point of view, stronger EU institutions will turn the Union into an “open federation”, a model to be followed on the path towards a world federation.

The main point therefore is not to tackle the challenges linked to production processes and their institutional consequences on the basis of the idea of “power” (of one’s country), nor of a “closed” Europe that should balance other powers. Quite the opposite. Shaping the Union as an open federation is the essential prerequisite to set up an institutional framework that can strengthen the universal principle of “common interest”.

This is what mankind needs in order to progress on the path of unity.

Thus, Ventotene is still a lighthouse for thought and action.