Building a Federation in the Middle East 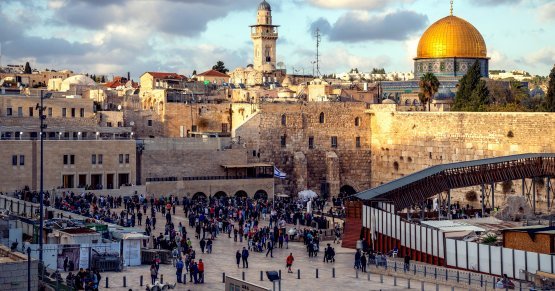 The Middle East exploded once more this spring, around the crucial issue that fuels an interminable conflict: the Palestine question.

Wars have been fought over it, and terrorist operations of various types have been conducted.  All in a setting that sees the great powers (the US and Russia) engaged in flexing their muscles, and exploiting states, political and terrorist movements to shore up their power in this corner of the world.

Recent years have seen the advent of various “regional” powers (Iran, Turkey, Egypt, Saudi Arabia) intent on operating in a similar fashion, with the aim of carving out their own area of influence (hegemony), in agreement with one superpower or another, depending on the circumstances.

From the Second World War onwards, the Israel/Palestine question has unfolded in an area that is crucial for the development of the global economy due to the presence of oil, the main energy source of the twentieth century. To ‘govern’ this part of the world, political stability is vital, and the state of Israel has always been, and remains, crucial in this regard.

While in the future the role of oil is destined to diminish as other forms of energy come into play, this remains a strategic hotspot: a crossroads between Asia, Africa and Europe, a key leg of the “Belt and Road initiative”,  characterised by one state equipped with nuclear weapons (Israel) and another that wants them (Iran): governing this area is therefore essential in terms of maintaining a global balance.

Attempts to stabilize the zone with a solution based on the “two peoples-two states” formula, with negotiations of various kinds, have proved unsuccessful. But even if this approach had been successful, it would certainly not have contributed to a “lasting” peaceful relationship between the two states. Borders are drawn based on power relations between states at any given time, and these can subsequently change, giving rise to new demands.

As Alexander Hamilton writes in “The Federalist”, “To look for a continuation of harmony between a number of independent, unconnected sovereignties in the same neighbourhood, would be to disregard the uniform course of human events, and to set at defiance the accumulated experience of ages“.

An independent, entirely sovereign Palestinian state amidst other independent, entirely sovereign states would only generate increased conflict among states. This is the lesson that should have been learned from the history of the European continent through the centuries, and up to the tragedy of the Second World War. States with absolute sovereignty are by nature war-like (Kant).

We can therefore imagine that the Middle East peace process should involve:

All of this is based on the assumption that the EU, which stands to gain from a solution of this kind succeeds in exploiting this crisis, the umpteenth, to carve out a role for itself in foreign policy, thus discovering that the strategic interests of its main countries (Germany, France and Italy) coincide with European interests in  stabilizing the Middle East, which also borders on the Mediterranean.

Europe recently accomplished a quantum leap in budgetary terms to tackle the economic crisis triggered by the pandemic, by creating “European fiscal capacity”: common debt on future investments and increased budget, with a view to introducing new, additional own resources.

It is time for a quantum leap in European foreign policy too. The Middle East is the test-bed, right now.

It is up to the European Parliament to come up with solutions and not just “hope” that others will take care of it.

It is also up to European citizens to point out that political coexistence is possible, even between different peoples, religions and cultures. The construction of Europe proves it.