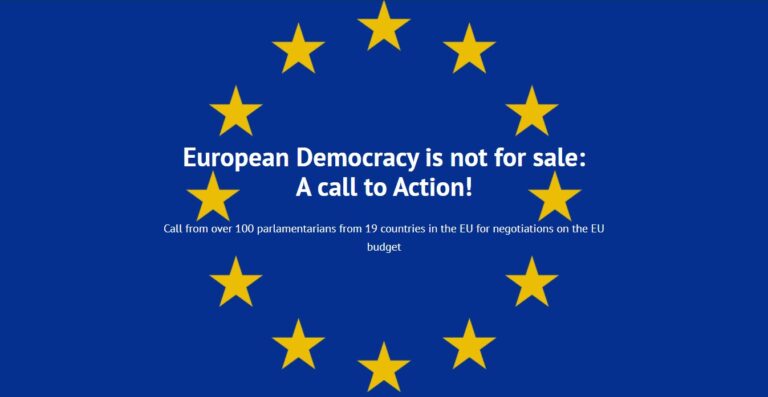 The European Union is at a crucial turning point.

The concrete implementation of the Recovery Plan, presented by the European Commission to save and relaunch a sustainable European economy, is bringing out conflicts on a decisive point. Should European financial resources allocated to national governments be linked to respect for the rule of law or not?

Some governments, such as those of Poland and Hungary, oppose this conditionality.

Important political values are at stake.

A trilogue has developed under the European Union procedure between the Parliament, the Commission and the Presidency of the European Council.  An interim agreement was reached on 5 November.

For the outcome of trilogue on the Rule of law conditionality pls. see

On October 20. in the European Parliament, 100 members from 18 EU countries had launched a high-profile Appeal with concrete proposals.

Below you can find the full text of the call with the list of signatories.

The European Union has insufficient resources to effectively combat misuse of EU funds and violations of the rule of law in the member states. The situation in countries like Hungary and Poland clearly shows that the EU must finally act. The EU Commission and the European Parliament have put forward good proposals for a rule of law mechanism. At the EU summit in July, the member states greatly weakened this mechanism, and the German government was finally gutted for the search for compromise between the EU Council, the EU Commission and the EU Parliament. A qualified majority is required for sanctions, the criteria were limited to serious corruption, all others were deleted. In addition, the Council, i.e. unanimity, should deal with sanctions.

For the next round of the trialogue procedure today we have launched this appeal, which over 100 parliamentarians from 19 countries have signed.

The European Union is founded on the shared values of democracy, the rule of law and fundamental human rights. This is enshrined in Article 2 of the Treaty of the EU.

The German Presidency of the Council of the European Union is currently facing a tremendous challenge: It must find a compromise on the next EU budget and the Next Generation EU recovery plan. Both dossiers would have a real added value for European citizens, since they will help to overcome the economic consequences of the Corona crisis and hopefully kick-start Europe’s transformation into an ecological and social market economy.

At the same time, negotiations are led to protect the European Budget and our financial interests against breaches of the Rule of Law.

We strongly regret the fact that the European Council significantly weakened the efforts of the Commission and Parliament to uphold the rule of law framework for the MFF and the Next Generation EU Fund. We therefore call on the German Presidency and all Member State governments to stand up for an EU conditionality on the rule of law that deserves this name and to agree to

This call to action is highly urgent. What we are facing is an unprecedented and escalating crisis of our shared values, which threatens the very survival of the EU as a project of democracy and peace. The rule of law is no matter of East versus West, no matter of frugals versus friends of cohesion. European democracy is a matter concerning all European citizens – let’s protect our shared values!

Dr. Franziska Brantner, European policy spokesperson of the Green Party in the Bundestag

Daniel Freund, negotiator in the Committee on Budgetary Control for the Green Group in the European

* on behalf of the USR group in the Romanian Parliament